In a “letter to the citizens of the world”, Vladimir Putin allegedly detailed the reasons that led him to launch the invasion of Ukraine by the Russian army on February 24, 2022, viral articles in French state. It is misleading: this letter was written by a Congolese Internet user on his blog, as he also specifies in the introduction to the text – truncated in viral publications – and he confirmed it to the AFP.

“Dear citizens of the world, I greet you “, begins the letter lent to Russian President Vladimir Putin. “The international news is full of events since last October. You have certainly read, heard, a number of things, sometimes true, sometimes totally trite. I understand that the offensive my country is currently waging against Ukraine gives rise to different interpretations. But I intend to enlighten you, even slightly, not only on my motives, but on the conduct of world affairs in general. I’ll be short, concise, so focus“, Continues the text.

This alleged “Putin’s letter to the citizens of the world“, in which the Russian leader allegedly analyzed and explained the geopolitical reasons that led him to launch a military offensive on Ukraine on February 24, 2022 in almost 2,000 words was published in articles on various sites and blogs in France (1 , 2, 3) and in French-speaking Africa, shared several thousand times in recent days, according to the Crowdtangle Internet Audience Measurement Tool. 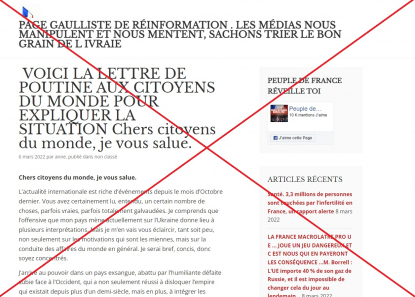 Publications shared hundreds of times on the social networks Facebook (1, 2, 3, 4, 5 ..), Twitter (1, 2, 3, 4 …), VK or even Gettr have also taken control and shared the contents of the letter attributed to Vladimir Putin. Requests for clarification on this message were also sent to us on WhatsApp.

This letter does not actually come from the Russian president, but was written by the author of a WordPress site.

A letter written by a blog author

An advanced search on Google (the principle of which is detailed in the video tutorial below) allows us to trace the first publication of the letter on the Internet.

This leads to an entry titled “Putin’s letter to the citizens of the world“, published on February 26, 2022 on the WordPress site of a certain Merseign Luzonzo, based in the Democratic Republic of Congo (DRC).

From the introduction it is clear that the words are not those of the Russian president. “This is not a real correspondence from President Putin. The aim is to present a different point of view from the one generally shared“, Is indicated in prelude to the text that appears later, identical to that shared on social networks. 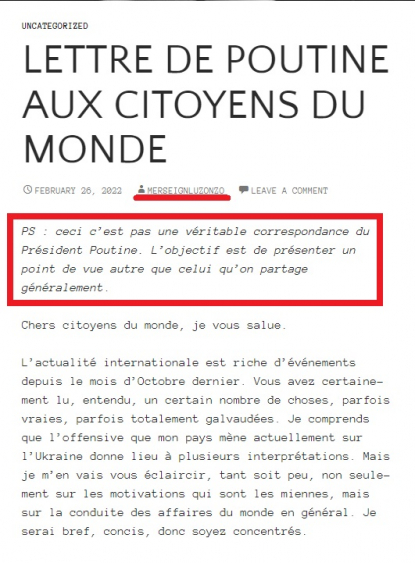 “You must have seen itthis is a personal blog and, as I wrote in the introduction, it is not a real correspondence from President Putin“confirmed Merseign Luzonzo, who is a civil administrator in the Democratic Republic of the Congo, in an email to AFP on March 8, 2022.

“My aim was, based on President Putin’s remarks in his various speeches, statements, interviews and more, to present a point of view that could be his own. In fact, I acknowledge that the article has been widely shared on the internet, which in my opinion, and for many, is the sign of a broad consensus on the ideas that are gathered there.“, Added the author of the letter.

“Furthermore, I presented the Ukrainian point of view, always on the same basis, just to give my readers the widest possible view of the situation, so that everyone gets an idea, which is complicated given the hegemony of the Western media. who naturally and very logically take a lateral position and present things in a rather partial way“, Merseign Luzonzo still abounds.

Indeed, on his site, he regularly offers voices commenting on current affairs, signed by his pen. On February 26, you published an article entitled “Zelensky’s response to Putin“, On the same model as the letter attributed to the Russian president.

In the introduction of this letter given to the Ukrainian head of state, it also reads: “This is not a real correspondence from President Zelensky. The form used aims to present the issue according to the position of Ukraine“. 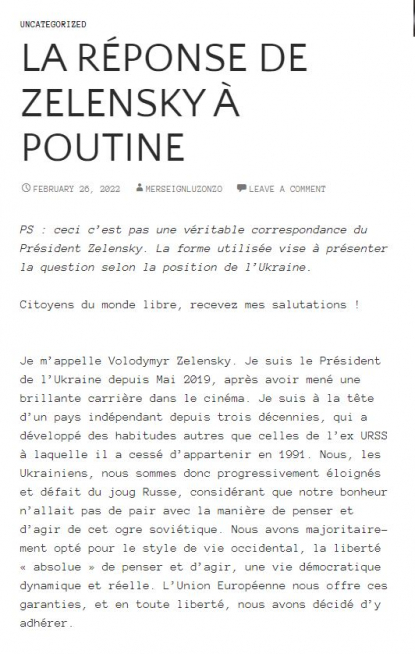 The name of Merseign Luzonzo also appears in some of the publications shared on social media, without identifying him as the author of the letter. 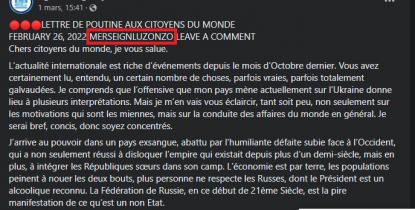 No occurrence of this letter in Russian on the Internet

The fact that the letter was shared in French, and not Russian, without reference to official sources, may also cast doubt on the fact that it may have been issued by Vladimir Putin.

Indeed, by translating the first sentences of the letter and entering them in search engines such as Google and its Russian equivalent Yandex, the results do not refer to relevant resources that would identify an official communication from the Russian president.

A keyword search, in Russian and English, on the Kremlin website, no longer yields results. The most relevant is a video of Vladimir Putin’s address released on February 24, in which he discusses the invasion of Ukraine. But the official English transcript of this speech differs from the words used in the “letter to the citizens of the world“.

The Russian invasion of Ukraine

On March 8, 2022, twelve days after the start of the invasion ordered by Vladimir Putin, the limit of two million people fleeing the fighting in Ukraine to find refuge abroad was exceeded, according to the latest counts of the Alto United Nations (UN) refugee commissioner. 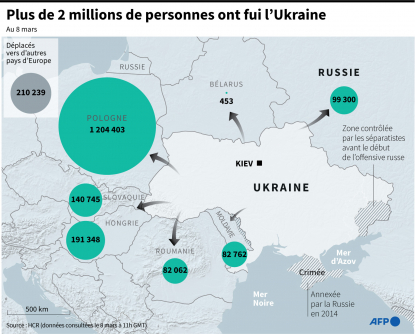 Thousands of Ukrainians are still trying to leave their cities bombed or surrounded by Russian forces, while Russia announced on the evening of March 7 the establishment of humanitarian corridors for the next day in five particularly exposed metropolises, the capital Kyiv, Sumy. Mariupol, Kharkiv, the second largest city in the country, and Cherniguiv, after several similar unsuccessful attempts.

Most of the escape routes pass through Russia or neighboring Belarus, an ally of Moscow, which was therefore considered an unacceptable option by Kiev.

According to Ukrainian officials, these attempts to create humanitarian corridors, discussed in a new round of Russian-Ukrainian talks on March 7, come as Russian forces on the ground continue to deploy around many cities or intensify their bombings.

The speed of the Russian invasion of Ukraine and the emotional significance of the images and statements associated with it have led to the dissemination of a lot of false or deficient contextual information, which has already been the subject of AFP fact-checking articles ( 1, 2, 3, 4, 5, 6, 7, 8 …).