On a daily basis, companies regularly organize meetings to take stock of an ongoing project or develop a new strategy. They are essential for developing a business, but sometimes they take too long. The reason is that they are not optimized. For Jamespot, the French specialist in corporate social networking and collaborative software, the secret of a good meeting can be summed up in two words: preparation and facilitation. For this the company proposes an innovative solution: Diapazone.

It brings together a number of applications that allow you to prepare and conduct your internal meetings efficiently, whatever your goals.

In the same category

After the antitrust, Ant Group targeted by Chinese anti-corruption

For many professionals, preparing for a meeting is seen as a daunting task. However, a poorly defined goal and poor organization can affect the effectiveness of these collaboration times.

Diapazone’s goal is to answer this problem by simplifying the preparation of meetings thanks to simple steps.

Organize an effective meeting in all respects

With Diapazone, it’s not about spending more than five minutes organizing your meeting. The organizer quickly prepares it by determining in advance several elements, including the participants. To do this, nothing could be simpler: you just have to select a set of people individually or one of the existing groups, for example, the marketing group. Defining an audience therefore no longer takes a few minutes, but seconds.

Temporality is also a crucial topic during meetings. To avoid wasting time, it is essential to define in advance how much time will be granted to each subject, which allows you to do Diapazone’s time-boxing function. Specifically, it allows the facilitator to set the time allotted to each part of the meeting, for example ten minutes for the icebreaker, fifteen minutes for the commercial part, twenty minutes for the strategic part … This timeline is visible to all participants. This way, everyone can keep an eye on the clock and avoid wasting too much time on conversations that don’t help them reach their goals. 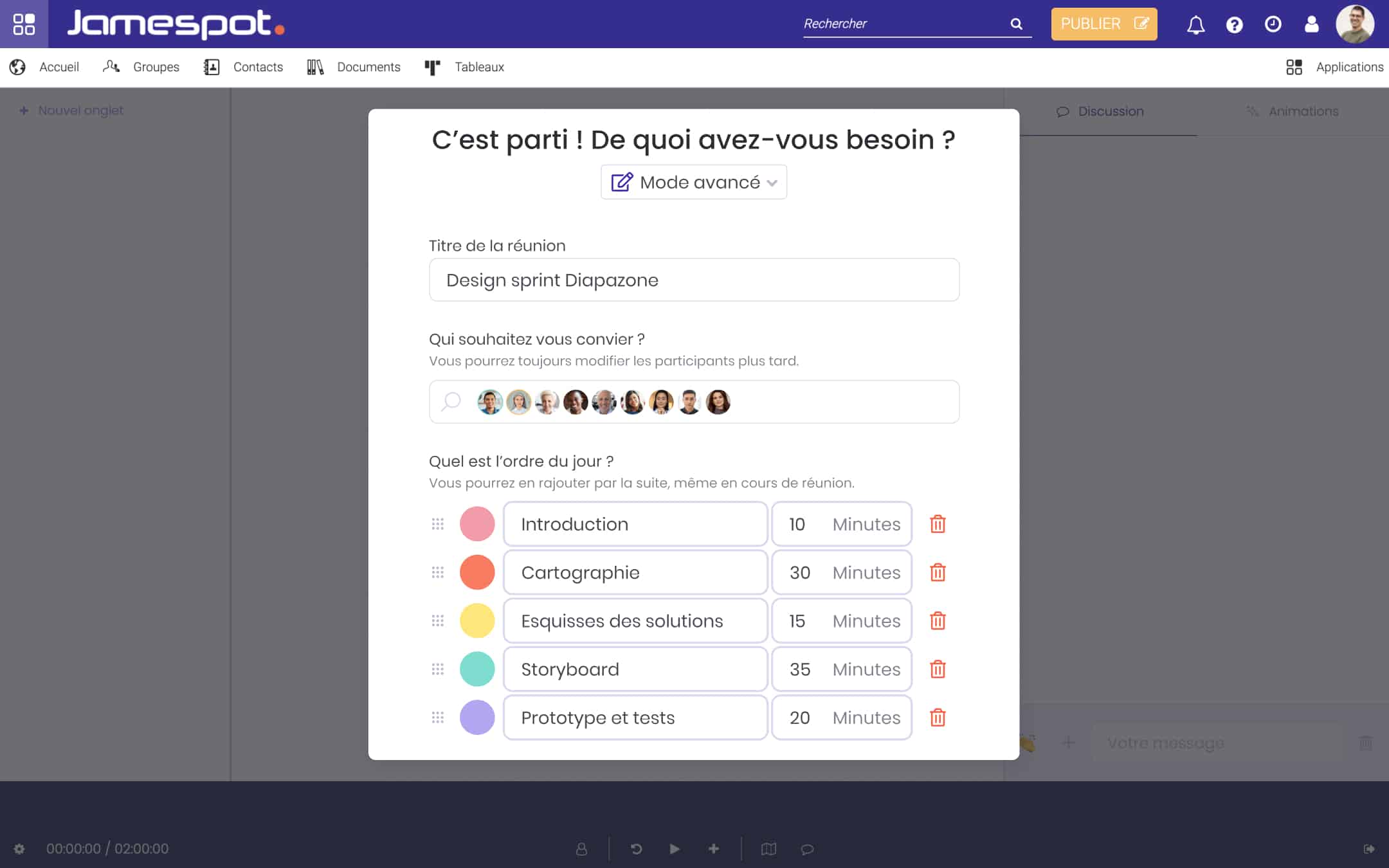 The solution is equipped with a timeboxing functionality. Illustration: Jamespot.

To increase the efficiency of his meeting, the organizer can add the tools made available by Jamespot in a side tab bar. It has the ability to upload documents, which can be downloaded from the corporate document bank, or to share them in real time. You can enter as many as you like, or create one directly during your meeting. You can also add links, for example to show multiple versions of a website page, project management tables, and a report that can be edited in real time by all participants. The organizer can then insert all the elements he needs to orchestrate his meeting as efficiently as possible.

To animate general assemblies or involve group meetings, Diapazone offers the possibility to create animations. Jamespot makes three available by default. These include the quick survey, which can act as an icebreaker to fit all employees and encourage them to participate. A checklist is also provided. It can be useful when participants are reviewing a specific project in detail. The last is a presence management widget. Specifically, each employee indicates whether she will be present at the next point of contact. For the organizer, this allows the organization and upcoming meetings with collaborators to be seen more clearly. 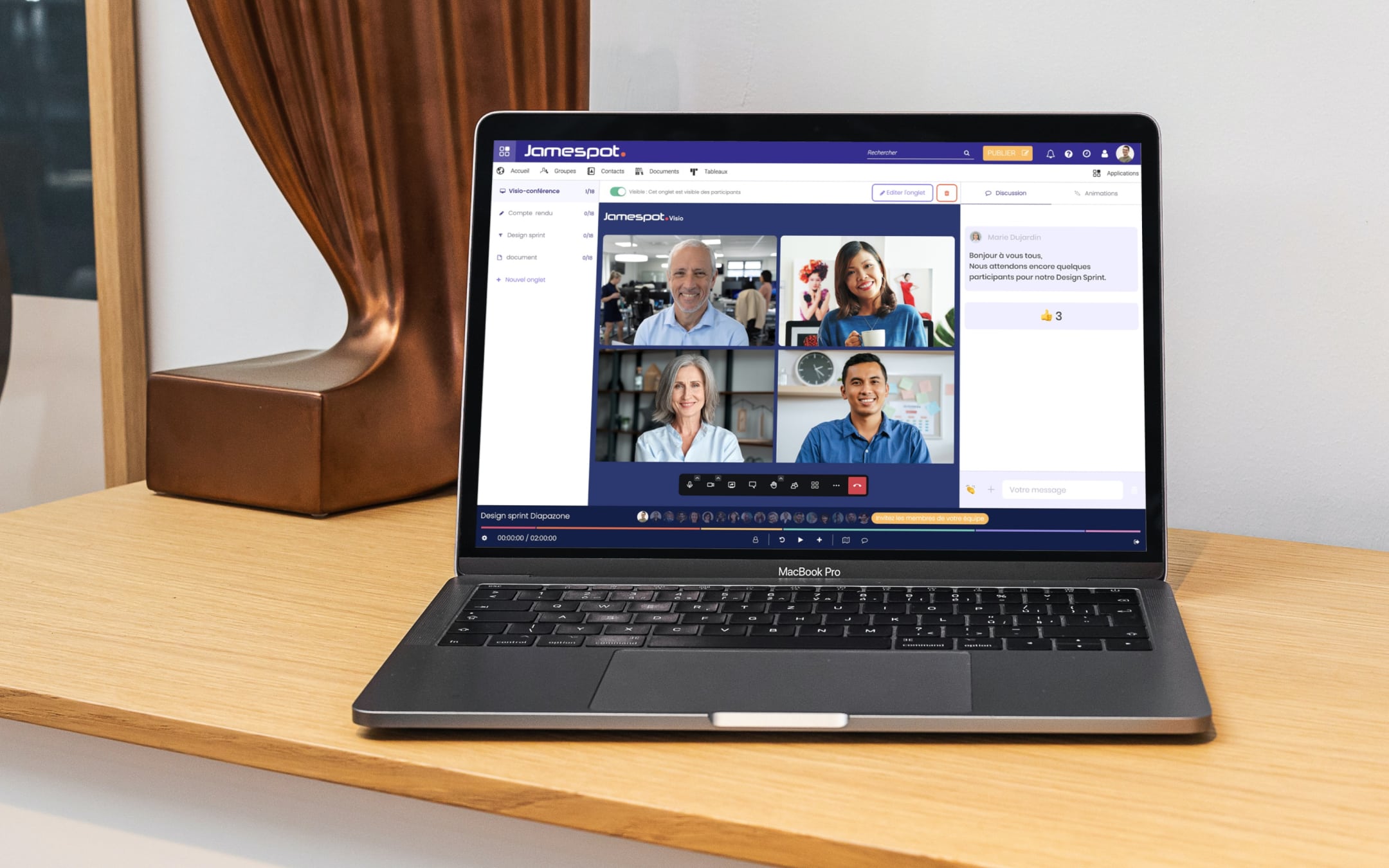 There are several elements of animation, such as polls. Illustration: Jamespot.

Once the technical and animation elements have been defined, it is time to kick off the meeting. Then the time-boxing begins, just like the chat. The latter is a central feature for any meeting, which allows you to enrich the discussion with your collaborators. Anyone can react using emojis, a fun and easy way to put people back at the center of meetings, which are increasingly scarce due to the lack of face-to-face encounters.

In the same perspective, the organizer can activate the animations prepared to promote interactivity with the participants. He also has the ability to add new ones in real time, which he sees enriched as his collaborators respond. 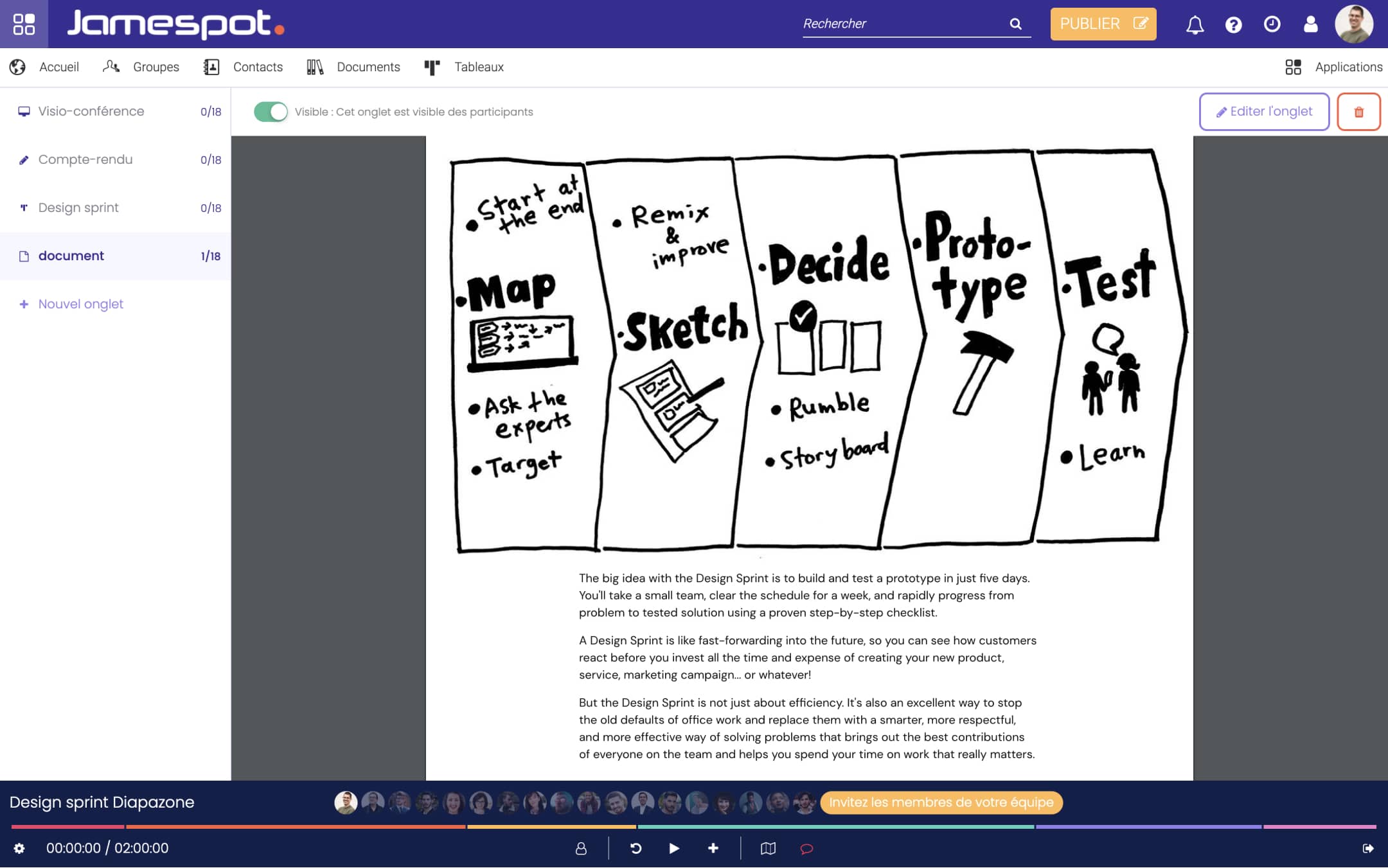 On the resources side, each employee has access to the documents, links and tables made available in the Diapazone cards. However, the organizer can block access to them and decide to open them as the meeting progresses. The goal is to focus everyone’s attention on the right elements at the right time.

Facilitate the drafting of reports

With Jamespot’s solution, the crucial stage of reporting is no longer a chore. Once the meeting is over, the tool automatically generates a document containing the main elements: the participants, the points discussed, the duration, the results of the widgets … The metrics relating to the engagement of the meeting are also indicated, i.e. the number of posts , amount of reactions and more engaged user. This lets you know if you need to encourage more interactions during future meetings.

In this report, users also find the documents, links and tables shared during the meeting. This saves collaborators from sending multiple messages and e-mails to retrieve the content of the broadcast. The same applies to the manual minutes drawn up during the meeting, which are available directly on the self-generated document. 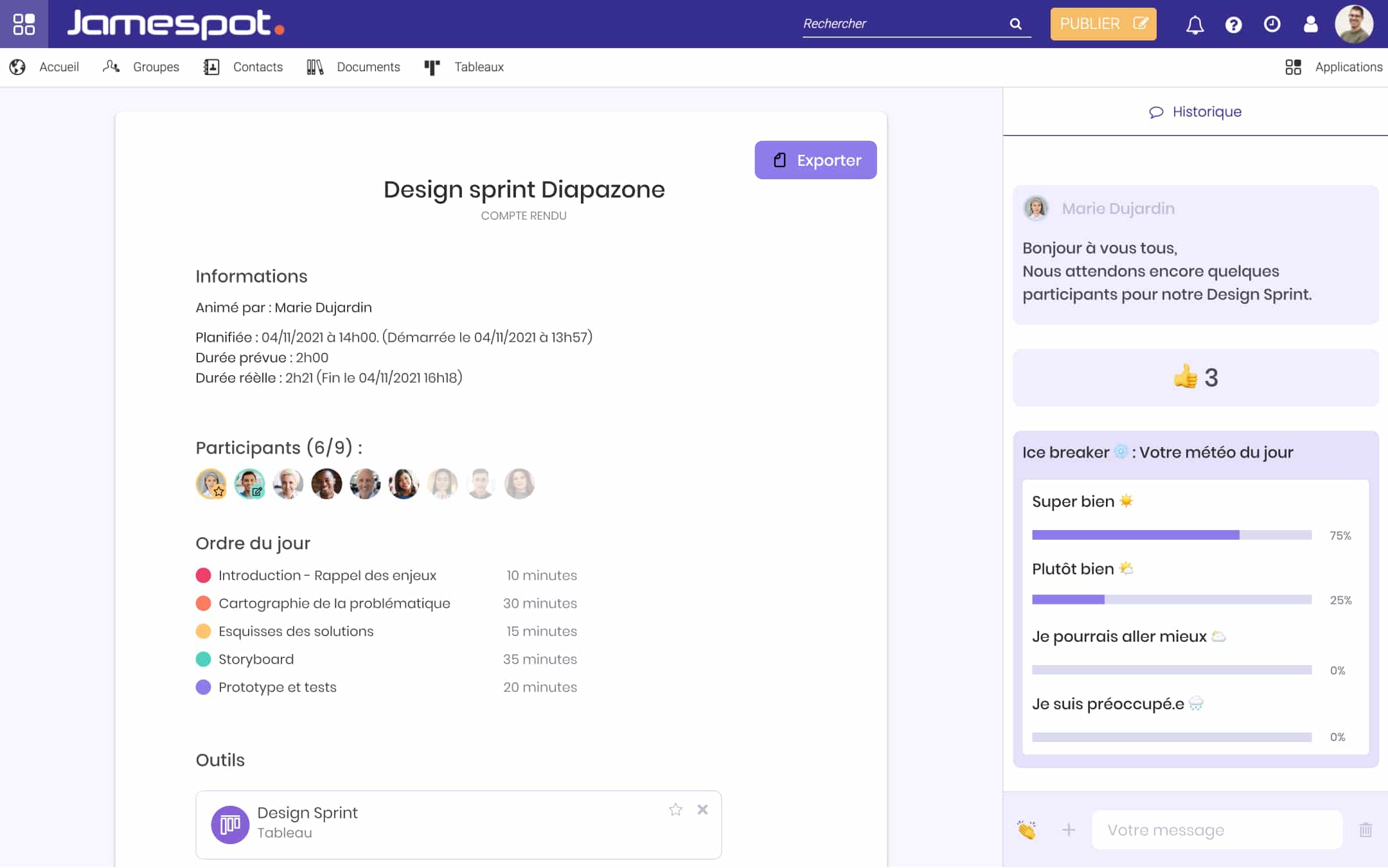 Diapazone automatically generates a report at the end of the meeting. Illustration: Jamespot.

The set can be saved with just a few clicks. However, only the minutes published during the meeting can be downloaded. This can be useful when you only want to pass on some information discussed during the videoconference to your customers.

Therefore, the Diapazone module delivers on its promise: offering professionals a powerful tool to organize and animate engaging and productive meetings with ease. It allows Jamespot to complement its offering and deliver a collaborative ecosystem that transforms the daily life of companies.