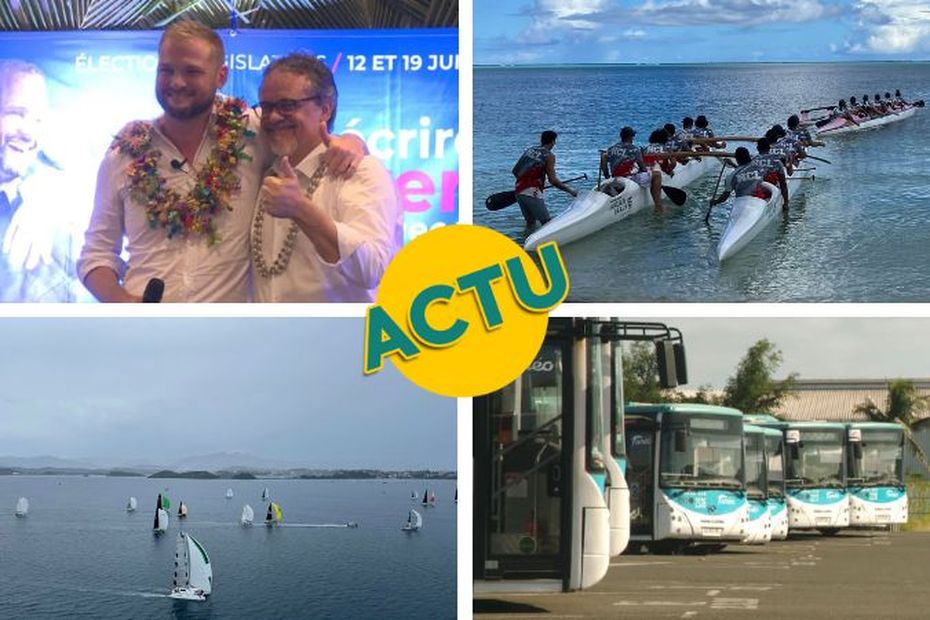 Here you will find the most news of Monday 20 June in New Caledonia and the region, with the results of the second round of general elections, the Pacific mini-games in Saipan, the Groupama race launched on Sunday and the return of the Tanéo buses throughout of the day at Mont-Dore.

Gédéon Richard, with the editorship of NC la 1ère
•

Philippe Dunoyer was elected in the first constituency and Nicolas Metzdorf in the second, Sunday 19 June in the second round of the general elections. The two loyalist union candidates, who support the President’s majority, received a total of 57,000 votes, or 40.90% of the vote.

Responses can be found here and full results by community here.

The official results will be announced at 11:30 am at the High Commissioner’s residence by François Billon, Counselor to the Nouméa Court of Appeal.

The show on the radio country issuesHe will return for voting this afternoon.

Extremely close result in Wallis and Futuna. Mikaele Seo, 51, takes first place with 49.44% of the vote, versus 49.23% of the vote for Etuato Mulikiha’amea, 55. That’s a difference of just 16 votes between the two candidates. The participation rate is 78.43%.

This is a first in the political history of Polynesia where the Taavini Huiraatira was a great success. The Independence Party wins the three constituencies with a big win for outgoing Rep. Moetai Brotherson with 61.3%. Steeve Chailloux won, as did Tematai Le Gayic, 21. The latter has a very good chance of becoming the youngest member of the new National Assembly. The candidates supported by Polynesian President Edouard Fritch were all defeated.

The Cagous get to the heart of the matter Monday in Saipan at the 11th Mini-Games of the Pacific. After the tennis, which started last Thursday, the other competitions will begin. The Caledonian triathlon team is based on the island of Rota, 128 km from Saipan. Seven disciplines are on the program, six concern our cagous. These are tennis, badminton, va’a, weightlifting, triathlon and beach volleyball.

The exit from Havanah Pass was “dantesque” for some people “exciting” for other sailors and their crew at the Groupama Race. The Grande Terre offshore race was launched opposite the Rocher à la voile in Nouméa on Sunday. The fleet split in two on Île Ouen, leaving the skippers with two options: sail along the east coast to reduce the distance to be covered as much as possible, or turn northeast and lengthen their route to gain more wind Find. This option was preferred by the majority of ships. rush hour is in real-time guidance and Tosot air conditioning leads in the IRC category.

A distress signal was accidentally triggered during the night antipodes, not available by VHF and satellite phone. Three sailing boats were diverted and a rescue operation carried out before the doubt was cleared around 2am. The race director reminds that boats are obliged to monitor channels 16 and 77 during the race.

Mondorian users of the Tanéo network can once again travel by bus beyond Saint-Michel during the day. The rotations of lines L8, M4, M2, M3 have resumed beyond the Mont-Dore high school. Traffic was halted after the rockfalls at the Saint-Louis junction over the Pentecost weekend. The evening hours are still not restored.