It has been several months since audiovisual companies explained that the abandonment rate of SVOD platforms tends to increase even as recruiting new subscribers becomes more difficult, especially since Netflix warned of a sharp slowdown in hiring in the first quarter of 2022. , quarterly results to be released on April 19.

According to this recent study by Kantar, the number of British households with at least one paid subscription to an SVOD service decreased by 215,000 in the first quarter of 2022, reaching 16.9 million households (58% of households). UK households subscribe to an average of 2.4 services, making it one of the fastest growing countries in Western Europe.

According to Kantar, more than half a million of these cancellations were blamed on “saving money”, as UK inflation hit 7%. But more alarming is that nearly four in ten households (38%) plan to cancel an SVOD service primarily to “save money” this quarter, up from 29% in the previous three months. Meanwhile, penetration of streaming services among Gen Z households declined for the first time, from a peak of 75.8% in the fourth quarter of 2021 to 74.6% in the first quarter of 2022.

The pace of subscriber growth is slowing, so in the three months to March 2022 only 3% of UK households signed up for a new subscription to a video streaming service, down from 4.2% in the first quarter of 2021.

Netflix and Amazon, the essential

Netflix and Amazon are seen as near-essential subscriptions – the last to be traded when families budget to cope with rising costs. On the other hand, Disney +, NOW, Discovery + and Britbox all experienced significant churn rates this quarter compared to the previous one – Disney + tripled its quarterly churn rate to 12% in the first three months of the year.

Two other phenomena enrich Kantar’s economic study: first, the United Kingdom is the most dynamic market in Europe. Just look at SVOD’s performance at the end of 2021 to measure, for example, the gap with France. Which leads some observers to say that SVOD’s growth rate can only slow down over time.

The SVOD market reached a record turnover of 3.16 billion pounds at the end of 2021, up 28% compared to 2020 which was already an atypical year. During the quarter, Amazon Prime Video remains the service that families subscribe to the most, followed by Disney + and Now (Sky’s SVOD service). Netflix is ​​only in 4th position, just ahead of AppleTV +. However, Netflix remains the most popular service according to the study conducted by ERA (Entertainment Retail Association), ahead of Amazon Prime Video and Disney +. 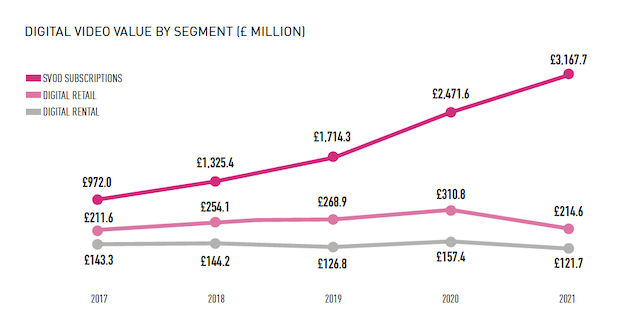 Therefore, the pressure exerted by the AVOD services and the FAST chains is strengthened. In fact, the Kantar study reveals that Netflix subscribers’ attitudes towards advertising are “softening”, with 44% now saying they don’t mind seeing ads on streaming services if it makes them cheaper, down. compared to 38% this time around last year. And as the number of services increases and the free offers grow stronger, the temptation for the “SVOD cut” grows stronger.

Dominic Sunnebo, director of global studies at Kantar, said: “With many streaming services seeing significant revenue growth at the height of COVID, this is a sobering moment. These findings suggest that UK households are now proactively looking for ways to save and the SVOD market is sobering. is already seeing the effects. “ and adds: “Therefore, it is more crucial than ever for SVOD providers to demonstrate to consumers that their services are indispensable in homes, in a market that has become highly competitive. New marketing and content acquisition strategies will likely need to be implemented to support this and avoid further disaffection “. 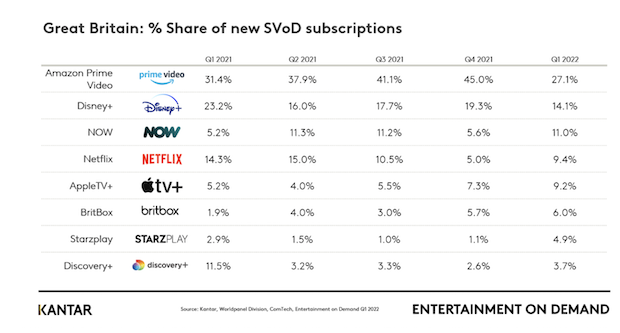 As Kantar explains, new offers are emerging that combine both access to very broad content offers and attractive price positioning that takes into account the purchasing power of households. What is happening in the UK will spread to the rest of the continent in the coming months, it seems inevitable. The transformation of the streaming market is therefore far from over.