We knew that Uber Eats and LFP have been partners since 2019. The leader in “food delivery” has achieved double that by now also being a partner of the French Football Association (FFF). A 3-year partnership (2022-2025) orchestrated by Fuse France, the sports marketing department of the Omnicom Media Group network. Ann Brandford Griffith, marketing director of Uber Eats France and Matthieu Caste, director of sports partnerships Fuse France return for sports marketing after the signing of this partnership. 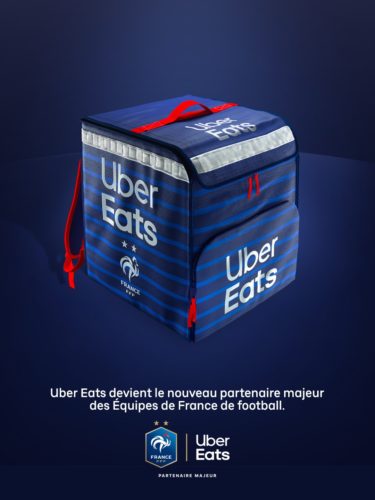 Bruno Cammalleri: can you go back to the genesis of this partnership?

Ann Brandford Griffith : Uber Eats has been a sponsor of the Olympique de Marseille shirt for three years. We have been an official partner of Ligue 1 since 2019, then title partner since 2020. The naming agreement between Ligue 1 and Uber Eats has been renewed for the 2022/2023 and 2023/2024 seasons. Football has always been a pillar of our strategy in France. Between food delivery and football there is a strong affinity among the public: most of our public is interested in football, which has long remained the number one sport in France. There is also a consumer affinity over time: Ligue 1 matches generally take place every weekend in time slots which are when people decide to have them delivered. For us back then, being a sponsor was a way to make ourselves known. The end of these three years of partnership was a pivotal moment for Uber Eats and we have reflected extensively with the Fuse agency following our strategy. We were coming out of a period of tremendous growth after the Covid period as, with health restrictions, food delivery had progressed tremendously. By the end of this period, over 50% of the French population had already received food delivery at least once. The stakes for us were no longer the same and we needed to expand our audience.

Bruno Cammalleri: Was Uber Eats above all looking for complementarity with its partnership in Ligue 1?

Ann Brandford Griffith : yes, for three years we had reached the age of 18/35, rather urban, who had an affinity with the digital world. These people have already converted to food delivery as a whole. We therefore tried to broaden our target and reach older targets such as over 35 who do not necessarily live in large cities or urban centers. We are present in more than 310 cities in France, including smaller cities such as those with fewer than 10,000 inhabitants. The FFF allows us to achieve this, especially since the strength of the French team is that we are no longer just football fans, but we are reaching a much broader goal with people interested in football as a whole. The French team brings together many more profiles, especially in gender balance. The matches of the French teams are unifying moments that unite families, which is much less important for Ligue 1. This partnership with the FFF seems perfect to us in addition to the existing one with Ligue 1. It is complementary in public terms because Ligue 1 has a predominantly male audience, mostly made up of fans. The French team brings together much more of the French population as a whole and the spectrum remains even wider in the ages of 15 to 70. The calendar is also interesting: when there is no Ligue 1 on TV there is often the French team.

Matteo Casta : Ligue 1 is the weekly soap opera for football fans that allows the brand to establish their preference for the brand and build an emotional narrative based on the passion of the fans. The FFF allows for a more statutory national approach and influence that allows the brand to work on its notoriety as a leading brand in the market. And by nature these rights are complementary: when the FFF plays, there is no Ligue 1!

Bruno Cammalleri: Was there a clear desire to launch this partnership in this year’s Women’s World and European Championships?

Ann Brandford Griffith It is also very strong to have three major competitions for this year of launching the partnership with the League of Nations, the Women’s Euro and the World Cup. But we would have done it too if there had been only one race. What we are looking for above all is the complementarity of moments and spectators.

Ann Brandford Griffith : There is also a complementarity in terms of narration: we are not only partners of the French team A, but we are also partners of the French women’s team and the amateurs. These are extremely important to us. We will begin the partnership with Women’s Euro which will take place in July 2022. Fairness and equality are very dear topics to Uber Eats. This partnership with the FFF is one of the only ones able to offer us this dimension of gender equality. In the billboards that we will soon put online we will treat women and men at the same level: we will be at the 50/50 distribution of the billboards on all the matches. Even if the men are playing, there will also be the women’s billboards that will air.

Bruno Cammalleri: What types of activations can we expect from this partnership?

Ann Brandford Griffith : the women’s Euro will arrive in July and we are very proud to launch the partnership with this Euro. There will obviously be an activation around this highlight. Obviously we will communicate around the World Cup, I cannot tell you more at this stage… There will be activations on women’s and amateur football to follow. Furthermore, we will try to offer exclusive experiences and added value to our consumers in these football highlights. The activations will not only be digital but there will be a 360 ° plan to talk to everyone on all channels.

Bruno Cammalleri: being a partner of a federation rather than a club, what changes for a brand?

Ann Brandford Griffith : our position as a partner is different. There we are one of the premium partners of the FFF and on the other hand we have been sponsors of the Olympique de Marseille jersey since 2019. We had a very strong bond with OM who carried our brand and our colors. The nature of the partnership itself and its scope are indeed different. With OM we have stayed with football fans who closely follow Ligue 1 or the Champions League. With the French team the audience is much wider with moments of competition that are unifying nationally. We will have a real expansion of scale and we will have more opportunities in terms of narrative with women and amateur clubs. This opens the doors for us to be able to express ourselves as a brand and carry our values. We want to be present locally with amateur clubs. Let’s think about how to accompany them every day and help them. It is still too early to give examples but on this amateur side we work more on experiments than on advertising campaigns.

Matteo Casta : Since the creation of football, the enthusiasm around the fans has been fueled by the rivalry between the clubs, which will have the best track record, the most stadiums, the best players. A passion that in some cases can divide. Joining a federation is joining the only national sports law that allows you to unite all people under the same flag with a common goal! A passion that unites! It is these unifying values, which unite the French, regardless of generation, degree of involvement or knowledge of sport, that have seduced Uber Eats.

Bruno Cammalleri: what is the role of the Fuse agency in relation to Uber Eats?

Matteo Casta : the Fuse agency was present with Uber Eats since 2019 and we accompanied the brand to find out how it would progress in football and its positioning, how it could conquer wider targets … This is the path we have taken together. We support Uber Eats on all strategic advice and rights negotiation with the federation. We are reflecting with Uber Eats on the question of the amplification of these rights: which narratives, which activations, which experiences, which media partnerships …